Manchester United legend Gary Neville has criticised the Red Devils’ loan signing of Odion Ighalo, telling Sky Sports that he ‘can’t let the club off the hook’ for how long it took them to sign a centre-forward.

The retired England international reiterated that the Manchester outfit have had plenty of time to sign a replacement for Romelu Lukaku and accused them of ‘desperately’ doing a deal on deadline day for Ighalo.

MORE: Who were the 113 players that Manchester United were linked with during the transfer window?

Neville even believes that the Red Devils’ acquisition of the Nigerian forward indicates that the club are ‘struggling to navigate through the transfer market smartly.’

Ighalo signs for the remainder of the season from Chinese Super League side Shanghai Shenhua. 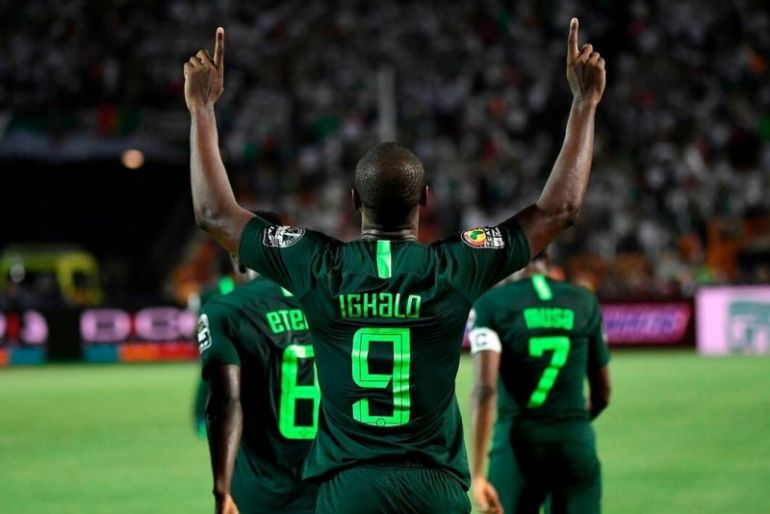 Ighalo celebrating a goal for Nigeria.

Here’s what Neville had to say on Man United’s signing of the striker:

“They just needed a body in that area, Rashford’s going to be out for another couple of months.”

“I can’t let the club off the hook though, unfortunately. Romelu Lukaku told us a couple of weeks ago that he had said he was going to leave last February or March.”

“That’s nine months to be able to manoeuvre and get into a position to sign a striker for the club for the long-term. And yet they have ended up desperately doing one on Deadline Day.”

“The boy may do very well. He might come in and settle in, he might score goals and do a job for the club.”

“But the fact that the club were in that position, knowing that Sanchez and Lukaku were leaving for many, many months, tells us that Manchester United, at this moment in time, are struggling to navigate through the transfer market smartly.”

Neville’s damning assessment of United’s search for a striker can also be viewed in the video clip below:

?”Ighalo, they just needed a body. I can’t let the club off the hook. they’ve ended up desperately doing one on deadline day” pic.twitter.com/kjY4e1kXBH

Whilst the move for the former Watford striker is initially a short-term one, it certainly can’t be considered a bargain move just yet.

The MailOnline claim that the Manchester outfit will pay £100,000-a-week of the striker’s mammoth £300k-a-week wages.

Bleacher Report’s Dean Jones also reports that the Manchester outfit will pay a loan fee of ‘around £4m’ for the former Watford forward.

Understand the loan fee for Ighalo will be around £4million.

Neville’s anger seems to be towards United themselves and not Ighalo, the forward has been given the dream chance to play for his favourite team at the age of 30.

It would be an amazing story if Ighalo’s move turns out to be successful.

Previous Patrick Mahomes is the latest MLB draftee to play in a Super Bowl
Next Who were the 113 players that Manchester United were linked with during the transfer window?